With sh*t like G.I Joe and Transformers 2 making the world of entertainment seem like all is lost in the cinema, I have been getting more involved in renting the not-so-Hollywood types for something new and possibly inspiring. It's very rare that you'll catch me saying much about a movie other than what I thought of it visually and/or artistically, but to my surprise I was left speechless. 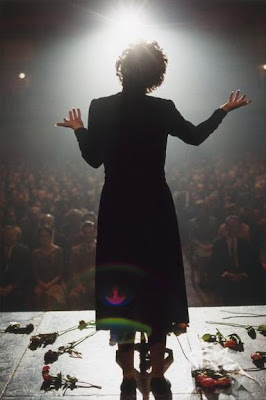 The movie was La Mome - aka La Vie En Rose - the life story of French singer Edith Piaf. I can't really begin to describe what I felt about it because it carries so many emotions throughout. The acting was beyond exquisite, appropriately played by Marion Cotillard, illustrating The Little Sparrow as she was once known; delicate and phenomenal with expression. Simply amazing.

I went to see Transformers 2 and I know what you mean... man, does it ever get corny! I've been checking out old movies now for quite a while. There's a few really good sites I'll have to send you. Also, PS- I'm not dead, just working on some illustration crud with a tight deadline. Write soon, miss!