To continue on the topic of bunnies. . . It actually quite surprised me to figure out why I was so drawn to them, as they have been lined across my desk, staring at me for days. The truth is, that bunnies and I go way back. 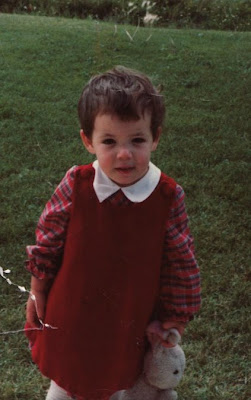 The bunny in this picture -clutched in my chubby little hand- is my very first bunny, George. I am not certain who I got George from, but I am told that I took him everywhere I went. When he started to look like a bit of a disaster, Mom decided to attempt to replace him with the exact same bunny in hopes I'd want a pretty new white one instead.

Because I created such solid characters out of my toys, even at such a young age, I wasn't inclined to replacement, as George was George and that was that. Instead, the new, pretty, bunny with the pink velvet tongue and shiny, silk, ribbon became George's new - and much younger- wife, Dorothy. A definite Wizard of Oz influence in there. I'll also add that it's kind of funny to put the two together and see how different they are, while they're the exact same bunny.

Dorothy and George is what they became, and to this day is how they're known. To Mom and I, they're just some old couple. It makes me laugh. Actually, I still have them.