So how about a sneak peek? I'm coming into week two of my next stage of production, which is so much fun now that we're into making cupcakes.. also known as Libby's "cuppies." I've only touched this pattern briefly and didn't think much of it until I decided to focus on stocking stuffer sizes. And oh what fun these cuppies have been, as I think I've turned into a 7 year old girl again. 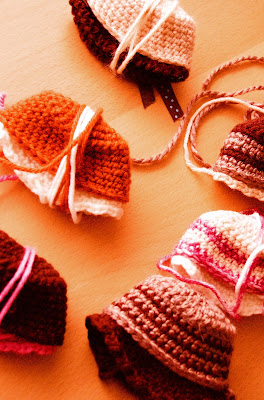 To sum up how my mind has been working, try catching yourself in a grocery store, asking what colors on the shelf illustrate to you the word "yummy." Certainly the idea doesn't have to be a constant mission but it lingers in and out at unexpected moments. Like suddenly the next day you're looking at the transit bus driver and wondering what kind of dessert he'd prefer most.

All of the senses lead to so many different sights, and in the same instance the sights lead to different thoughts. How would I make a cupcake look as delicious as ones I've sunk my face into? How could I create a coconut topped cupcake? Carrot cake? Red Velvet? Or what color would taste like maple icing? This is lately why my eyes wander in the middle of a conversation, or I'll randomly start to salivate, or... most importantly, why I may have been caught watching YouTubed episodes of Strawberry Shortcake at 2 am.