I'm not really a journal writer when it comes to my blog, but today I thought I'd be different just for fun. Like a Dear Diary in a sense. This was my day. 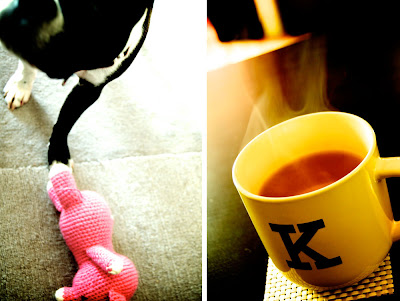 Woke up in the morning, had some tea and played with the Pig. 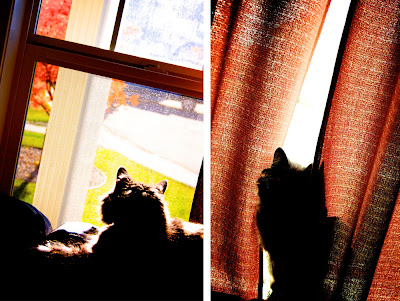 The sun was shining brightly and we all took advantage by basking in the front window, admiring the new scenery of Fall. Where there is sun, there's always a Tim. 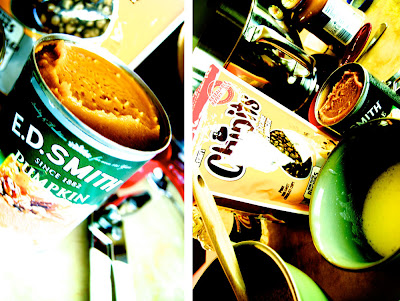 All of this Fall talk got me thinking it was time to make some pumpkin muffins. So to prepare, I pulled everything out and placed it on the counter. 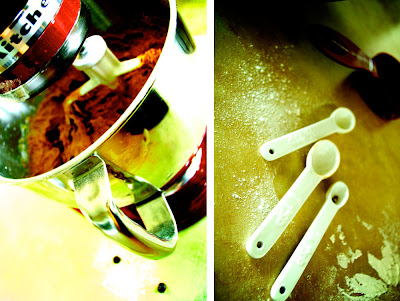 I mixed together all of the dry ingredients, where when it came time to add the wet mix, I discovered we were one egg short. Pig and I left to go to the store. *15 minute intermission* 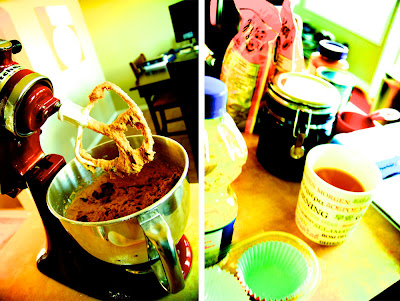 We returned and made our muffins. As they baked, the house smelled like ginger, cinnamon and nutmeg. Mmm. 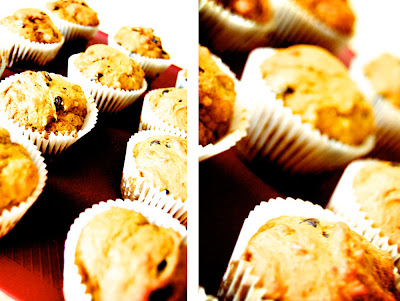 We lay them out on the counter to cool. While they were still warm, I sampled a bite with a little scoop of coffee ice cream as a treat. It was quite delicious. Then it was time to go outside and play. *20 minute break.* 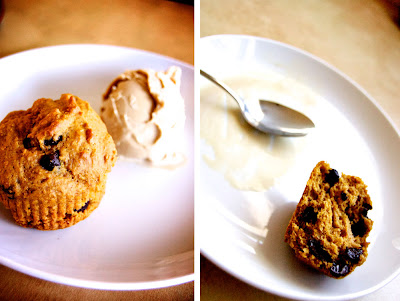 We all came inside to have a rest. Pig napped while I crocheted a new project; while E.J. came out of his coma. 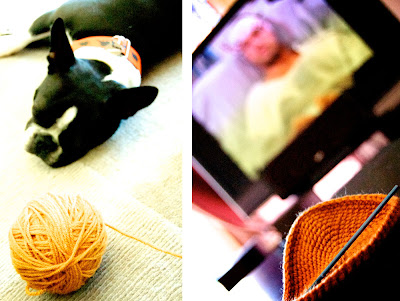 It was a productive day for everyone.
Posted by libbytree at 14:47 No comments: 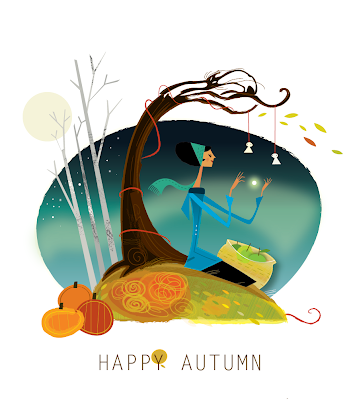 The greatest season begins.
Posted by libbytree at 20:36 No comments: 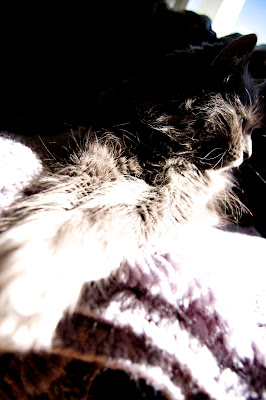 A single photo - no words - capturing a moment from the week. A simple, heart warming moment. A moment I want to pause, savor and remember. If you're inspired to do the same, leave a link to your 'moment' in the comments for all to find and see.
Posted by libbytree at 20:01 No comments: 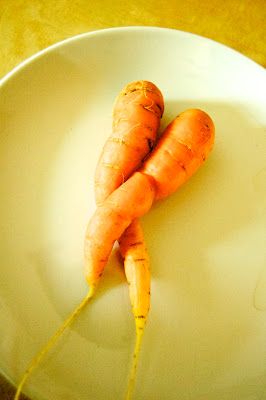 When carrots are planted too close together, they snuggle.
Posted by libbytree at 15:22 No comments: 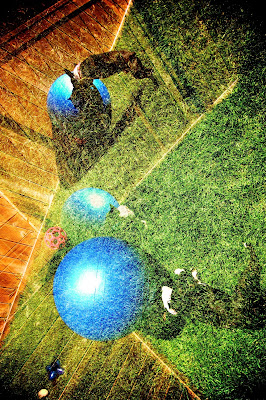 So we took advantage of the sunshine today and practiced some good outdoor fitness. Breakfast loves keeping fit and having fun
Posted by libbytree at 16:00 No comments: 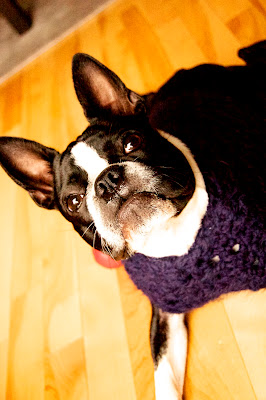 The many interesting faces of Breakfast. Someone has a snotty nose.
Posted by libbytree at 13:23 No comments: 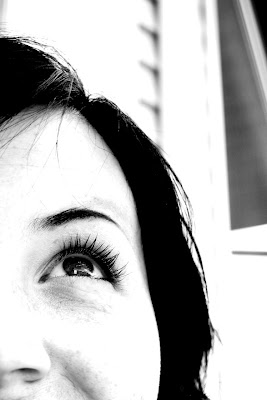 Be who you are and say what you mean because those who mind don't matter and those who matter don't mind. ~ Dr. Seuss.

A nice little quote that my aunt sent me, in regards to my desire to please the entire world at once.
Posted by libbytree at 20:20 No comments: 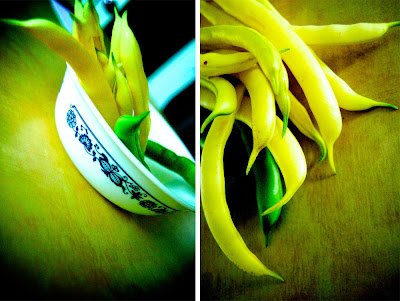 Lately I'm loving yellow, as the sun isn't shining as brightly as it used to and the leaves outside are gradually changing color. Perfect timing for some yellow beans from the garden, which were ready for picking this afternoon. I look forward to the season ahead, for all of the changes it brings. Farewell to green, and hello to yellow.
Posted by libbytree at 15:13 No comments:

Lately, I've been thinking a lot about my Grandma. Maybe it's the weather? I'm not sure. Or maybe it's that back to school air, which takes me back in time to the days when she was here. 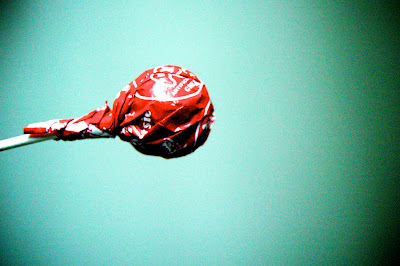 Every other day after school, I used to walk to my grandparents' house to visit, have a grape soda and a nice long chat with Gramma, as she watched her game shows and soap operas. She listened intently with the occasional chuckle, where she'd tilt her head back and shut her eyes. I loved making her laugh. It was just so contagious. 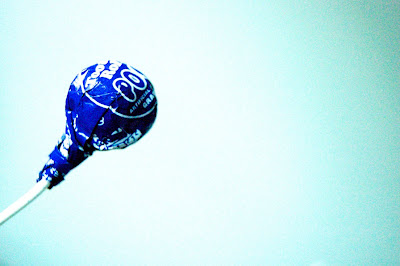 I remember last seeing her in late January or early Feb, as it was too frigid outside to walk to the next school, where I often met with one of my friends. Papa went out to the garage to warm up the car, while Gramma grabbed her coat and said she would be coming along. On a day such as it was (Winnipeg at its best) she would have stayed home. She was insistent this time, as she had a lot to say. 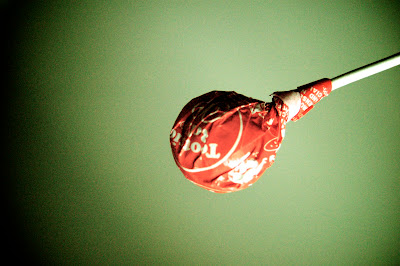 The entire drive, she spoke about how she was so proud of me, that I was capable of doing so many things that even I wasn't aware of yet. "You're the light of my life, kid" she said in a tone that was both casual and matter-of-fact. It struck me as odd, for a while, as she was not one to be so open, emotionally, to anyone. 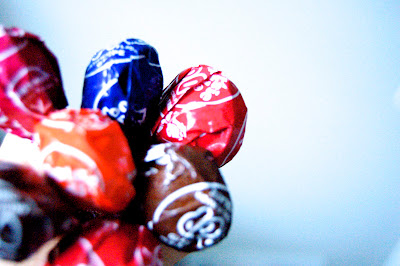 Had I known that it was the last time I was going to see her, I would have said something. Anything. But, instead I got out of the car and said my goodbyes like it was any other day. As I made my way toward the school, I could hear behind me, the automatic window roll down. Open enough to slip her fingers out into the cold, she placed in my hands a bouquet of Tootsie Pops. "Gramma loves ya, kid" she said one last time as I looked at the gift while the car drove away. She had just given me her final goodbye. Simple and sweet, in more ways than one.

I miss her every day.
Posted by libbytree at 21:58 No comments: 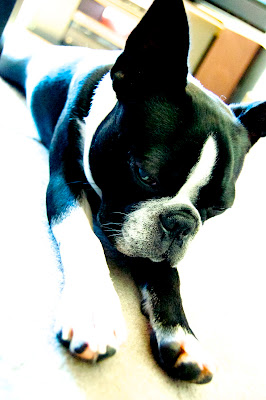 Feeling kind of bored of the rain. Hopefully tomorrow we can go outside and play.
Posted by libbytree at 22:37 No comments:

At Dear Libby, we firmly believe that creating is a fantastic form of self expression and release. Have you been a little scared to give art a try? Not sure how to use the right supplies? Need some guidance with some room to play and experiment, without the pressures of a classroom setting? We're firing up our first round of Libby "paint parties" to chase the seasonal blues away, as summer makes its great escape. 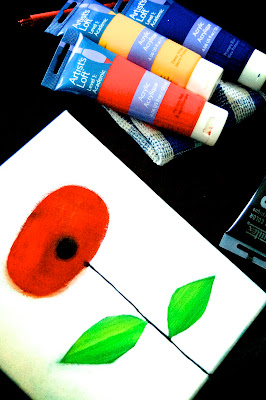 We are booking paint parties for the Fall/Winter months, with a variety of themes that will surely evolve as we go. To ask about our rates and bookings drop us a line. We bring the supplies, you bring your imagination *and of course a group of friends to join in the fun.
Posted by libbytree at 14:00 No comments:

With summer gradually making its exit, I decided to sit down and figure out how to make a sweater for Breakfast. While I may be a bit of a hypocrite for dressing my dog when I have never agreed with the idea as entertainment for humanization, it's a different story when we have a shivering pig eyeing up the blankets on the couch more and more each day. Since I can't serve him a tea, this is what we came up with. 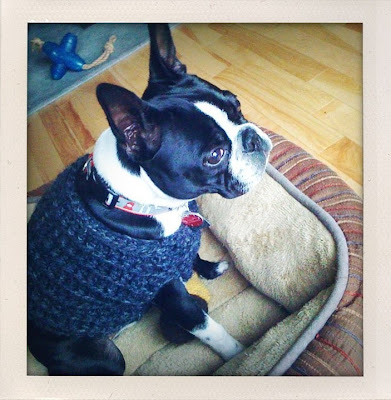 While this attempt is definitely a great example of a first try - low neck, leg holes slightly off - I know what to do for the next attempt, as we head closer to the season which Breakfast hasn't experienced yet. The season which is also my favorite. I won't say the word just yet, because I don't want to get any hate mail, so let's just enjoy the last little fragments of summer until then.
Posted by libbytree at 12:09 2 comments: