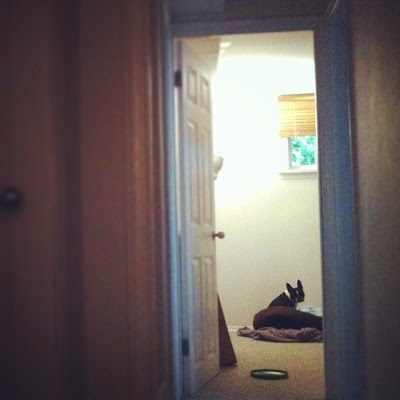 Another rainy weekend. For the record, indoor frisbee sucks.
Posted by libbytree at 09:19 No comments: 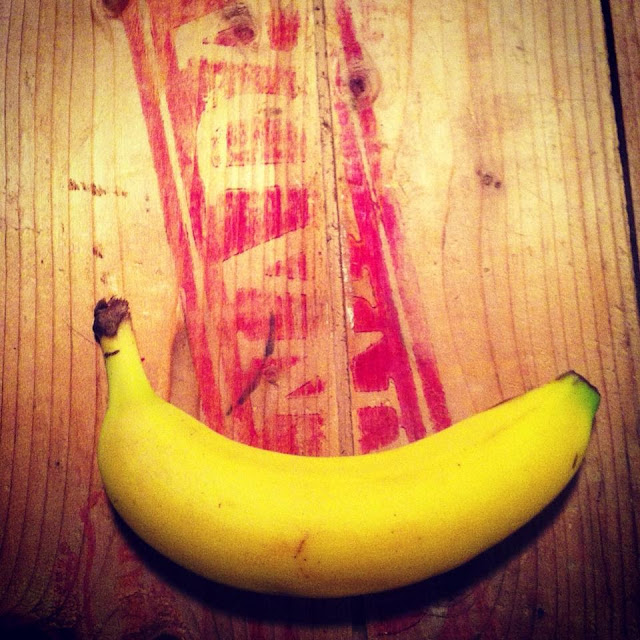 Bananas make smiles, and great telephones.
Posted by libbytree at 19:04 No comments:

We went for a very long walk yesterday, before the rain, and took some pictures at a parking garage. 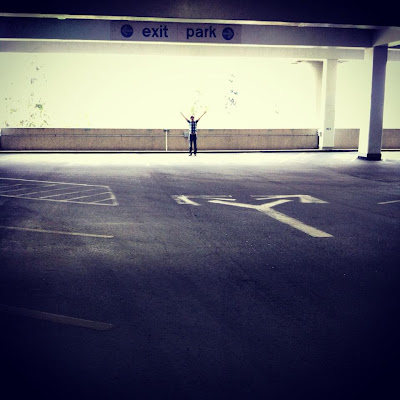 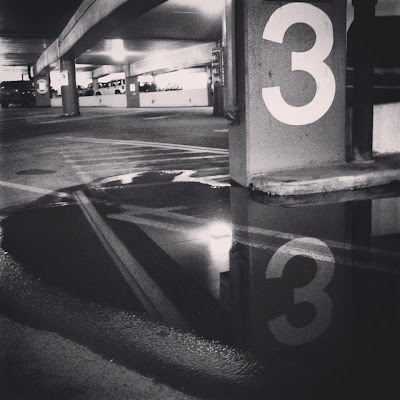 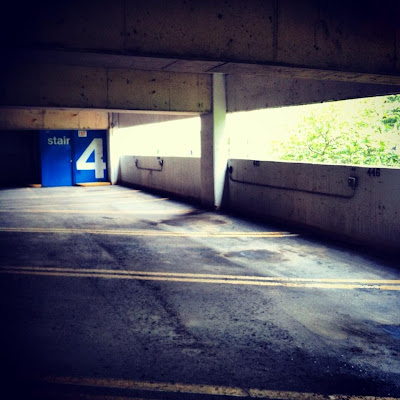 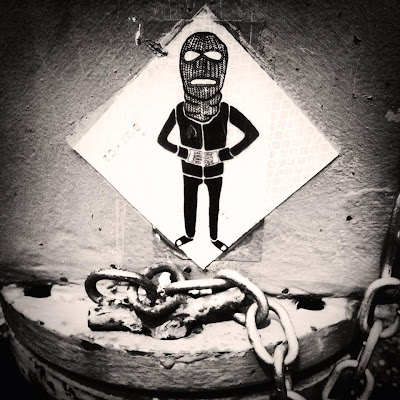 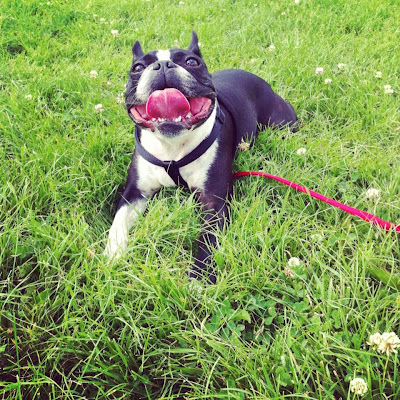 This face.
Posted by libbytree at 16:27 No comments:

I can't say that I'm feeling all that peachy these days, when it comes to my current living situation. There is a lot of frustration that I'm trying to keep in check, because I'm impatient.. and just sorta sick of starting over time and time again. I can't be hard on myself about it, but it happens. 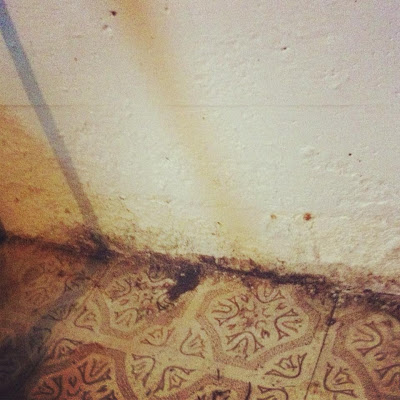 What has me feeling most frustrated, is that no one is answering my questions, when it comes to this issue; which I don't think a tenant or landlord should ignore. I've been emailing him about the status of this place since summer of last year; when things started to get wet around the edges. It wasn't at all like how it is this year, so I agreed to stay for another summer. Let's just say that life has its lessons, and I'm learning whole lot. Trust your gut. 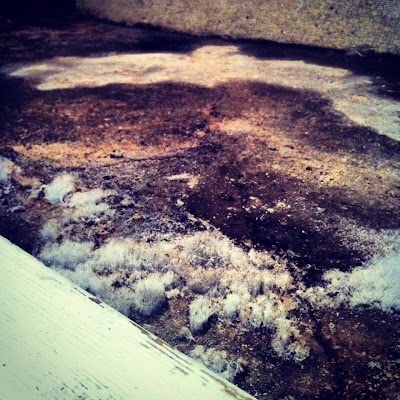 Today, I wasn't so kind with my words, and sent a textured picture of the things that are living on the surface (never mind the shit that we can't see) and said that this is absolutely unacceptable. I'm leaving at the start of September, which is reasonable notice considering when my complaints first started. Maybe I'm a bit more patient than I give myself credit for, though September couldn't come soon enough. 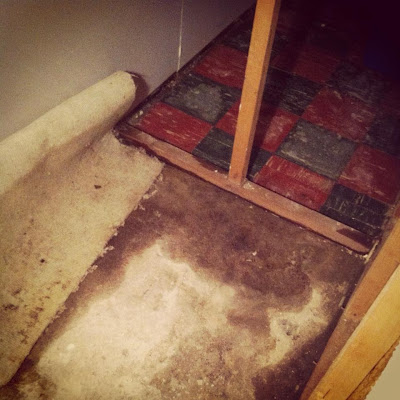 If I could find a place to live in, right this moment, I'd leave without hesitation. As tempting as it may sound, I can't just abandon life and its responsibilities, and say that's that. I wish I could, believe me. I'm making some calls, to speak to the right people, to help sort out this problem properly. No one in their right mind can tell me that this remotely acceptable or safe to live in. 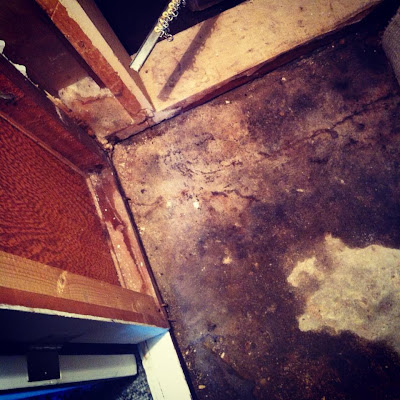 Once I get some boxes and can get my things packed, to be shipped up and out of here, maybe I'll feel differently. It's hard when you can't do a single thing, or see that forward motion, for assurance that it's going to get better. We're sitting idly, and it stinks. Literally. I absolutely hate it. 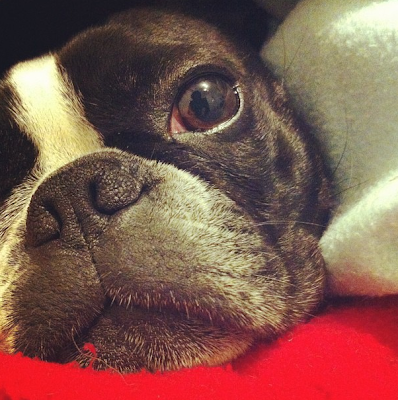 While this all makes me incredibly sad, angry, and short fused, I know that things will get better, and that even in this situation, we need to make the best of it. We have a dry corner of the house where we can stay safe and tucked away from the wet stuff. I've got blankets, pillows, some movies, my bed(!), and a little dog who makes me smile no matter the situation.

It will get better.. I promise

Posted by libbytree at 15:48 No comments:

I always find it interesting to go from loving something so much; to wanting to get away from it sooner than later. Unfortunately, that's the relationship I have with my home right now, and it's not enjoyable. 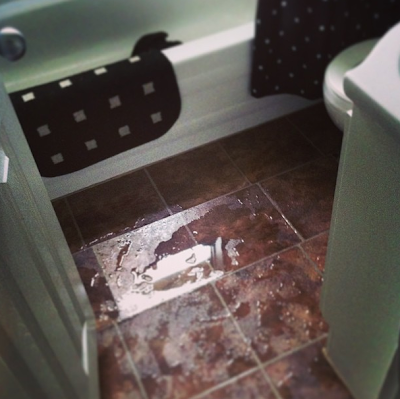 I'm doing my best to remain positive and hopeful that things will get better, because they always do. Change is good for the soul, they say. When it isn't exactly what you had planned, frustration comes in waves. My living conditions are absolutely disgusting, to say the least, and I've opted out of my lease 2 months in advance because I know that we shouldn't be living among this mess (or paying for it.) My landlord has failed to provide me with a suitable home, and has yet to reply to my messages. If there was a way to pack the stench coming from my storage space (below) and send it to him, maybe he'd man up and do his job. He lives in Vancouver, so if he can't see the problem, there's nothing to worry about. Excuse my French when I say so, but go fuck yourself. 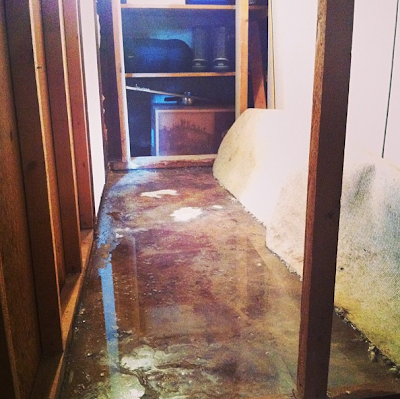 Moving is a bit of a process I'm far too familiar with; after having lived in at least 18 homes in my lifetime. I'm incredibly organized and on the ball when it comes to sorting through things and taking what I need with me. In some ways it's like a bit of a cleanse, but maybe it's fair that I've grown somewhat sick of starting over; though it is almost a second nature to anticipate it. 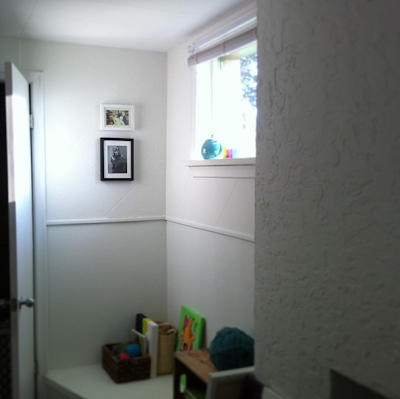 I've almost been here for two years. That feels like a long time to stay in one place, especially under these conditions. I experienced flooding last year as well, but figured it was a problem to do with drainage, since it stopped in mid-July, regardless of the rain we continued to receive throughout the season. I don't particularly like to complain about the weather, but the last two summers have not been the greatest. It took me about a year to accept that a huge part of my issues with the weather have much more to do with my living situation. I have wanted to escape more than often. 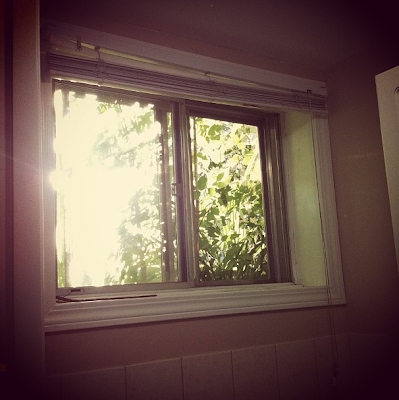 A basement suite lacks direct sunlight, no matter how big your windows are. The last two winters were very tough on the system, especially considering the moisture that exists down here along with the amount of daylight we lose out on. I used to love the winter, and here I've been dreading it since the day that it melted. To describe the cold that we've experienced down here, I can't put it into words. It was stupid, though somewhat comical, to be perched in front of a space heater (or oven) for a moment of comfort. I don't wish to experience another year of that. 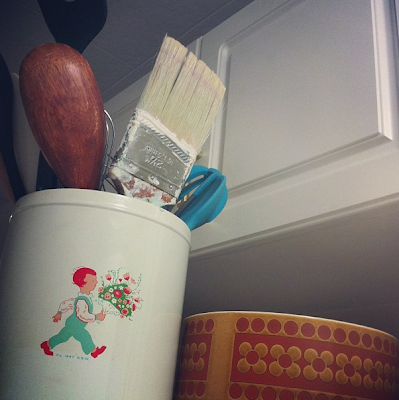 I guess I just need to remind myself, until we get out, that it's okay to be frustrated with my situation and have those moments of impatience where I'd rather blast through time and into a place that is more positive, livable, and sound. I've come a very long way, and there are many morals to this story.

Life and its surprises are what you make of them, and when it gets bad it leaves an open space for the good stuff to come trickling in. We will find a dry and happy home to call our own, one day.

I think my problem with writing lately is that there is so much to show-and-tell, all at once, I need to condense it.. I can't guarantee anything. Go. Pick a topic.

My basement (suite) is continuing to flood, which makes me feel it's time to stop procrastinating and find a better option. I've noticed things about it that are difficult to live with, including the moisture in the summer, which leads to an incredibly frigid winter. I would be lying if I said I wasn't already dreading the thought of it.

I guess the toughest thing is parting with this place, because it's all I've known since I arrived. It's my first place on my own, and it has all transformed so nicely in front of me. I'm somewhat proud of my home, and the things that I can say I worked hard to maintain. The moisture problem frustrates me because it's not something I can ignore or fix myself. My dehumidifier fills up multiple times in one day. That's super gross.

If I can find something close to this neighbourhood, I'd be thrilled, because we both love it here. On the flip, it wouldn't be bad to try a different part of the city, for the sake of something new again. I really hope we can find a proper fit, as much as I don't want to part with what we have. Fingers crossed for a warm and dry future... and maybe even something better.

Change is okay. Change is good.
Posted by libbytree at 15:25 No comments: 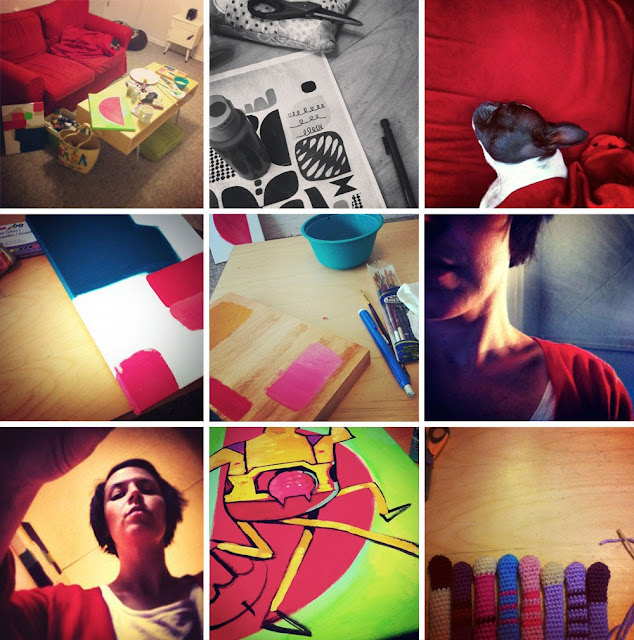 I post far too many pictures on Instagram, but if you like that sort of thing, you can creep in on what I've been up to; it's like snooping into my visual library, with lots of fart drawings and Breakfast's face. I'll be doing my best to post more here, in my Doogie Howser diary as well. There's just so much to show-and-tell these days, it's hard to keep up. The display above is what I was up to Saturday night. We partied until 2am.

Posted by libbytree at 14:07 No comments: 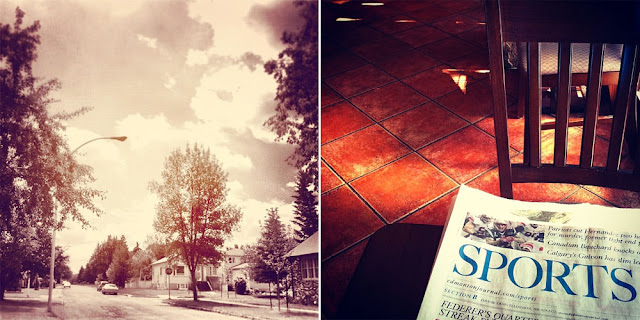 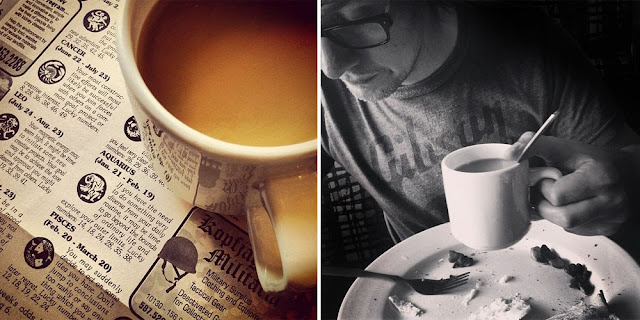 I cannot complain about this stay-cation I chose to take, for an extended Canada Day long weekend, doing the things I love best; including a little bit of alone time. It was so refreshing. 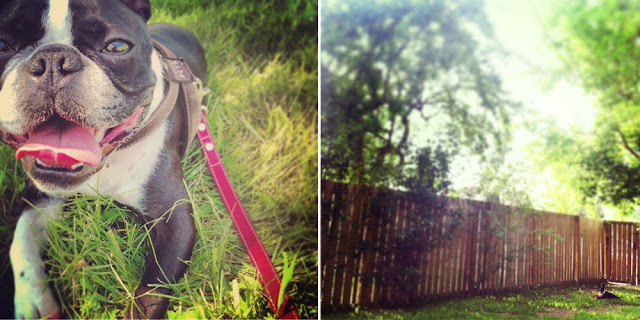 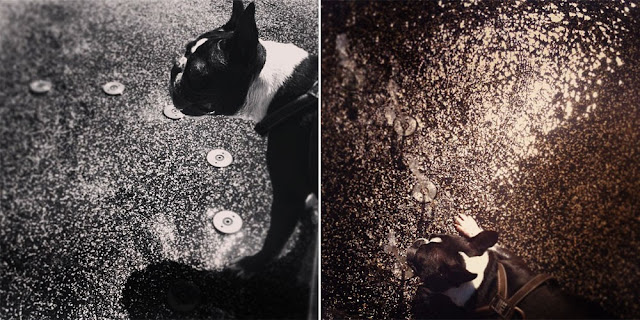 We hung out under our favorite tree, walked for hours, and often came home to lounge in the backyard. I love these days of being outside.

Also, we learned recently that there is a water park just down the street.
Happy -HOT- Canada Day Weekend!