While going through some things on my computer, I came across an old folder of photographs of some projects I did back in college, with mixed media. I didn't prefer to tamper with paints when time was to be used sparingly like it was in college, but there were times where I chose to experiment and get my hands dirty for the sake of something new.

This piece was painted with acrylics on masonite board, for a project based on character development. I did some digging for this one, as it is based off of a story I once heard about my grandmother. Her appearance, I based off of an old photo I remember of her when she was young, with wavy, black, hair. Her expression was intense, her features delicate. 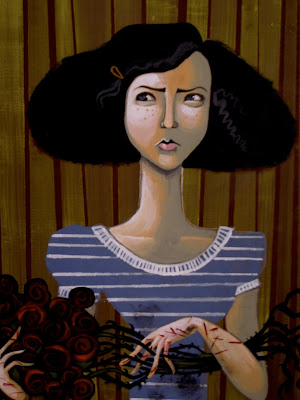 My grandma kept a massive garden in her backyard which she loved more than most things in this world. I remember when I was little, she used to get me or my sister to hold a flashlightfor her, so she could search for slugs outside and blast them with vinegar. She was hardcore and tedious, inspiring, a perfectionist.

When she sold her old house, she was devastated to hear that the new owners had torn up her garden. She cried for a very long time about it. She wasn't an openly emotional woman, so that really kept an image in my mind. How heartbreaking. Instead of focusing on the sadness involved, I decided to create my own part of the story by presenting her, vengeful. As a result, I kind of like this painting because it reminds me of what is most important and seeking what is yours no matter what it takes.
Posted by libbytree at 02:10